Do not let your language flow become stilted, awkward or too formal :
Read your work aloud—mark changes as you go and revise where necessary--then read it aloud again. Be certain your sentences and dialogue sound real—not exactly as we speak—our real conversation is full of oddities—stops and starts—and boring. Write your dialogue as you would like speech to sound. Your reader will decide to like or dislike your characters through reading their words and thoughts. Your character’s words will evoke emotion in your reader and through emotion, hold his/her attention.
Dialogue is the only tool you have to create emotional pull on the reader so he or she will “feel with” your characters and want to keep reading. Dialogue establishes your story’s mood. Properly selected, the words you put in a character’s mouth will intensify the story’s conflict, explain action and create tension and suspense.
Dialogue speeds up your scenes. When carefully constructed and effective, a character’s words move the story forward rapidly. Your main characters’ words to other characters can and will add bits of setting and background—create foreshadowing. They will communicate the theme of your work.


Avoid passive constructions:
Constantly ask yourself if your subject is acted upon rather than acting. Use of the passive tense is a form of telling rather than showing. The hard part is—we often speak in the passive—its use is ingrained in our thoughts—but it is a habit a writer must break. Telling rather than showing your reader what happens deadens your story. Set your word processing program to warn you of passive sentences during spell and grammar check. Note that the use of the passive is often revealed when a writer uses the word “by” in the sentence.


Your words must create a series of pictures for your reader: 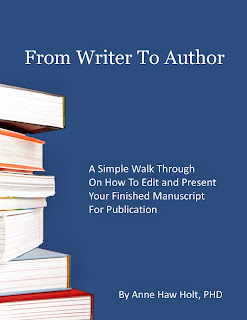 The magic lies in using concrete nouns and action verbs—then presenting them in simple sentences. It’s as straightforward as this—if you refer to a tree always make it an oak tree, a willow tree or a sycamore tree. Your tree could be “the crooked old maple tree that leans out over the James River at Hutchinson’s Point.”
Do not write “tree” alone without adding a descriptive name until you have rooted in your reader’s thoughts an image of YOUR tree. If you simply write tree or river or road and neglect to add a name or exact descriptor, your reader will see only his or her image of a similar object, not yours, and will be shut out of important parts of your story.


Search for and remove as many instances of the verb form “was going” or “were thinking” as possible:
These are verb forms we regularly use in conversation, but they will dull your writing. Set your word processing program to search and methodically check for them. Try your best to rewrite your sentence to replace each one with an action verb.

“He was seeing, he was doing, they were singing, I have been reading,” and the word “had,” will creep into your writing no matter how hard you try to avoid these words—and to many of these constructions are deadly. They take the punch out of your sentences and make them sound flat.
Search out these verb-forms and find a way to say such things as he spotted, he ran, they sang, I read, in their place. It probably is impossible to remove every instance of these forms, but remove as many as you can.
This change alone will make your words and sentences seem more immediate—more active. Your reader, without even knowing, will read the simple past as happening at that moment. It will “show” the action and make your story or paper come alive.


Replace the verb “to be” with active verbs as often as possible:
The verb “to be” is a workhorse in our speech, but becomes no more than filler in the written word. Its use weakens your sentences and dialogue--it saps meaning and takes color and texture from your sentences.
Am, is, are, was, were, be, being, been, had, have—these forms of the verb “to be” occur in every work and cannot be eliminated, but you must deliberately minimize them.
Read the work of one of your favorite modern authors. Take note of how the writer artfully finds ways to avoid using the verb “to be” as often as possible.
When revising, read your sentences carefully and when you find an instance where you used the verb to be, try to insert an active verb, a verb offering the reader a picture of your characters taking some action.


FOR EXAMPLE:
“I was singing alto when I should have been singing mezzo,” reads with more force and movement when written “I mistakenly sang alto rather than mezzo,” and it takes fewer words.


Watch for and change any SINGSONG sentences:
You may find whole paragraphs where your sentences use the same word order—the same subject and so forth. There may be times when you use nearly the same sentence length—over and over—enough of that will put your reader to sleep. Strive for variety in sentence form and length. Singsong constructions and consistently uniform sentence length will soon cause your reader doze—to lose the thread of your story or essay—and eventually stop reading.

Avoid extremes in sentence construction.
Most modern writers do not use one-word sentences, no matter what form they are writing. Any sentence running over two or three complete lines across the page however is probably too long. Your work will read much more comfortably and your meanings will be clear if you break most extra long sentences into one long and one short.